Monuments in the Netherlands

Bronbeek in Arnhem houses numerous Indies monuments, where many commemorations are also held.

This replica shares its name with the monument at the Kalibanteng War Cemetery in Semarang (22 September 1988) and was unveiled by HRH Prince Bernhard on 10 November 1988. The monument symbolises the solidarity of all the youths who were interned and lost their lives in a youth/men’s camp during the Japanese occupation. The monument was crafted by the sculptor Anton Beysens, based on H.L.B. Mahieu’s design. 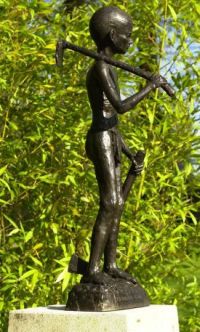 This monument was unveiled by HRH Prince Bernard on 24 June 1989. It honours the memory of those who died during the construction of the Burma-Siam and the Pakan Baroe Railways. The monument represents the Three Pagodas of the similarly-named mountain pass on the border of Burma and Siam (Thailand). 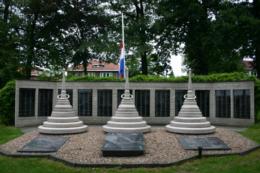 The monument was unveiled by HM Queen Juliana in Apeldoorn on 15 December 1971. In 1984 it was damaged by vandals. Following essential restoration, it has stood at Bronbeek since 1985. The wall represents the camps’ fences; it had previously featured a statue of two women and a child. The sculpture was designed and crafted by Frank Nix, himself a camp child. 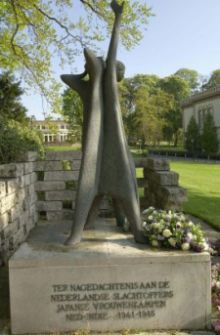 The monument was built in memory of more than 22,000 civilians and ‘romushas’ killed at sea. They represented part of over 68,000 forced labourers shipped in ‘hell ships’  by the Japanese during the Second World War in South-East Asia. The sculpture was designed and crafted by Anneriet Pijper and unveiled on 17 August 2004. 18 September 2009 Commemoration. 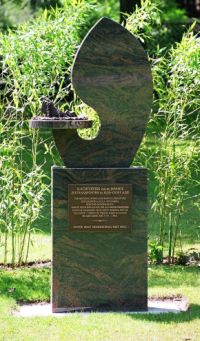 In 1944, the Japanese occupiers built the Dampit Prison Camp on East Java for youths aged 15 to 18 . On 19 October 2001, the monument was unveiled by a family member of Bert Oosterhout, executed in the camp. Rudi Augustinus designed the monument. 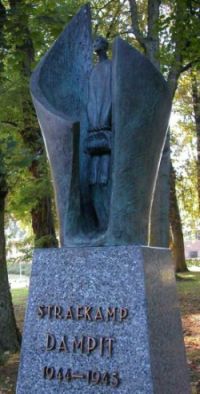 Other monuments in the Netherlands

A full list of comparable monuments in the Netherlands will appear here as soon as possible.

The Dutch Government settles part of its debt of honour.  It is making budget structurally available for, among other things, the expansion and rejuvenation of the 15 August National Commemoration. The broad National Programme for Collective Recognition includes Commemoration,  Remembrance, Care and an Indies resting place in the Hague.

Many organisations will use the additional resources jointly to enshrine more strongly the Indies-Dutch heritage in the collective memory of all the Dutch.