The second goal is to increase awareness in the Netherlands of the commemoration of this historic day, the struggle against Japan in the former Dutch Indies, the resistance mounted, the further persecution during the Japanese occupation, and its consequences for the people who lived there.

The IHC, one of four national centres for the remembrance of the Second World War, is a professional organisation active in the area of commemoration and remembrance of the victims of the Second World War in South-East Asia and of the de-colonisation process. The IHC directs attention to this history through activities such as public meetings, educational pursuits, and projects.

Lasting commemoration – Collaboration with the National 4 and 5 May Committee

The Board of the 15 August 1945 Commemoration Foundation has for many years guaranteed the continuity of a dignified commemoration. The Board has stated this as its prime and most important task and its policy reflects this. The Board is supported by professional staff of the National 4 and 5 May Committee in the implementation of that policy. 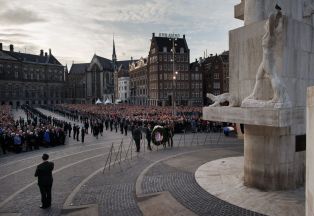 National Commemoration on the Dam on 4 May