Every year during the National 4 May Commemoration at the Dam, a wreath is laid for all civilians who were killed or died in Asia as a consequence of resistance, internment, war violence and exhaustion during and directly following the Japanese occupation. This year (2018), the Moluccan choir ‘Nada Nirwana’ sang the Lord’s Prayer in Malaysian in the Nieuwe Kerk.

Nada Nirwana (heavenly sounds) is a capella choir from the Geredja Indjili Maluku (Moluccan Evangelical Church). The church choir from Barneveld was offcially formed in 1972. Every Sunday the choir sings during the service of worship and during the so-called ‘malam penghiburan’, the memorial service for the bereaved. Watch the performance on NOS ‘uitzending gemist’ via bit.ly/2w3Rcjz from 00:36. 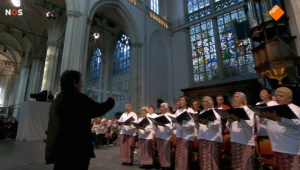 Commemoration ceremony on the Dam

The commemoration ceremony at the National Monument on the Dam is open to everyone. Seating is reserved for guests who attend the commemoration service in De Nieuwe Kerk.  Over 20,000 people with an interest in it attend. If you wish to take part, then take into account the crowds and follow the direction boards. For the annual programme go to www.4en5mei.nl/herdenken-en-vieren/herdenken/nationale-herdenking/programma

Wreath-laying for all war victims

Then, five wreaths will be laid by first generation war victims for various groups of war casualties:

As the commemoration has a national character, no wreaths are laid by representatives of other countries involved in the liberation of the Kingdom or by countries which have occupied the Kingdom.

Before the parade begins, flowers are laid by fifty primary school children who took part earlier in the Silent March through Amsterdam. Afterwards, anyone can lay a floral tribute or wreath during the parade. Scouts also hand out flowers.

NOS broadcasts the service from De Nieuwe Kerk live from 18:45 on NPO 1. The National Commemoration at the National Monument can be seen live  on NPO 1, 2 and 3 from 19:45.